Republicans have joined the race by Democrats to remove Donald Trump from office, after Mike Pence rejected a vote to oust the president.

Liz Cheney, the third most senior Republican in the House of Representatives, and the daughter of former vice president Dick Cheney, said she would vote to impeach Mr Trump.

“There has never been a greater betrayal by a president of the United States of his office and his oath to the Constitution,” she said in a strongly worded statement, adding that Mr Trump “summoned this mob, assembled the mob, and lit the flame of this attack” on the Capitol last week.

It comes after members of the House voted in favour of invoking the 25th amendment of the US Constitution on Tuesday, which would deem the US president unfit for office and have him replaced by the vice president.

But hours earlier, Vice President Mike Pence wrote a letter to House Speaker Nancy Pelosi saying it would “set a terrible precedent” and that he would not agree to do it.

“I do not believe that such a course of action is in the best interest of our nation or consistent with our constitution,” he said.

With the Democratic bid to invoke the 25th amendment unsuccessful, the House will now move to impeach Mr Trump following the rioting by his supporters in Washington DC on 6 January.

He faces a charge of “incitement of insurrection” in an impeachment resolution levelled by the Democrats. 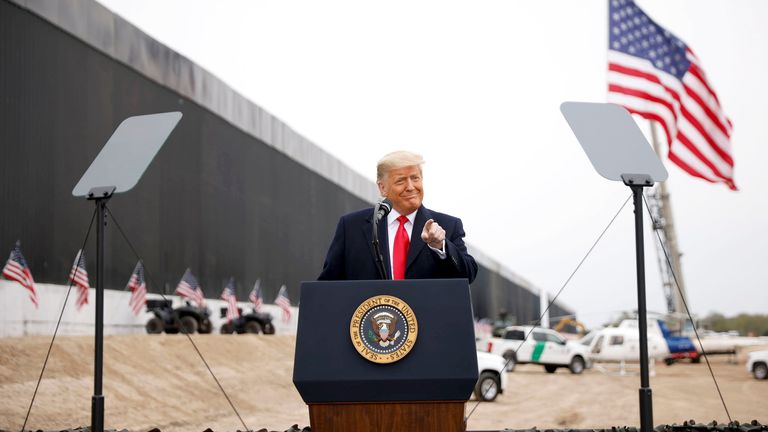 ‘The 25th Amendment is of zero risk to me’

Meanwhile, House Republican leader Kevin McCarthy has reportedly decided not to ask members of the party to vote against impeachment, saying it is a matter of individual conscience.

A vote will take place on Wednesday, which is very likely to pass. It would then move to the Senate for trial, with senators acting as jurors.

With insufficient time to impeach him before he is succeeded by Democrat Joe Biden in seven days’ time, the Senate would still be able to ban him from running again.

But earlier on Tuesday, the president dismissed the bid to impeach him for a second time as a “hoax”.

Speaking in Alamo, Texas, he said efforts to remove him from office are part of the “greatest and most vicious witch-hunt” in US history.

Speaking before he inspected the construction of a section of the border wall with Mexico, Mr Trump added: “As the expression goes, be careful what you wish for.

“The impeachment hoax is a continuation of the greatest and most vicious witch-hunt in the history of our country and is causing tremendous anger and division and pain far greater than most people will ever understand.”

His appearance in Texas was his first since the US Capitol siege, which took place last Wednesday as politicians were counting Electoral College votes to confirm Mr Biden’s election victory.

During a speech in Washington before the violence broke out, the president encouraged his fans to march on Congress, sparking accusations he incited the rioting.

But on Tuesday he took no responsibility for the chaos, which left five people dead.

Before his Texas visit, he told reporters: “If you read my speech, and many people have done it and I’ve seen it both in the papers and in the media, on television, it’s been analysed and people thought that what I said was totally appropriate.”

“Everybody to a tee thought it was totally appropriate,” he added.

Mr Trump also warned that efforts to impeach him are causing “tremendous anger” – but insisted that he wants “no violence” in the run-up to Mr Biden’s inauguration.

Prosecutors have brought dozens of cases after the deadly attack at the Capitol, with more charges expected in the coming days as investigators identify more members of the pro-Trump mob.

Mr Trump has been banned from posting messages on Twitter and Facebook, declaring in Texas that “free speech was under attack”.

It comes as the FBI warns that armed protests are planned nationwide ahead of the inauguration on 20 January.