In the tightly contested state of Florida, emotions are running high.

Outside a Joe Biden rally in Tampa, small but vocal groups of Democrats and Republicans are facing off.

“Why are you so dumb?” a Biden supporter shouts out of his car window, with an equally furious Trump fan yelling back.

On Thursday, both presidential candidates went head to head at rallies in the US – and so too did some of their supporters.

Separate tribes line either side of a busy highway, each armed with brightly coloured opposing banners backing their man.

“Vote for Trump like true Americans. You want socialism move to Cuba,” a heavily tattooed biker named Ghost shouts to the chorus of beeping trucks.

“We’ve been getting middle fingers showed at us [by Democrats] for the past hour and a half that we have been here,” he tells me.

A towering figure with huge muscles, he’s an imposing sight.

He disputes that he could be accused of being intimidating, saying everyone has the right to choose who they vote for.

And he claimed that, when Biden supporters showed up at Donald Trump’s rally earlier in the day, no one abused them.

In fact, we saw a Democratic voter being heckled that morning, and Trump fans are definitely unwelcome guests at the evening’s Biden rally.

We watch as one man leans into Democrats’ cars to question them.

Eventually, aggravation sparks confrontation and a driver spits at him.

“He kept coming in our car. We told him not to, we had to do something to get him away,” Dee and driver Phil say as another argument breaks out in the background. 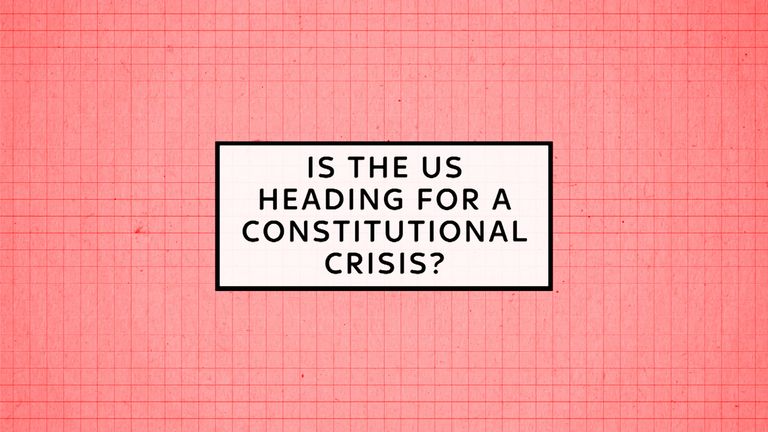 What if the US election result is contested?

“My president is a racist,” one man shouts.

“Trump is not a racist,” someone chants back.

The polls in Florida are uncomfortably close and divisions are deepening.

“This is not going to be the worst,” warns Phil.

“When Biden wins next week, Trump’s going to say that it’s rigged and he’s going to tell all his people with guns to go out and start protecting their liberties,” Dee claims.

If there was any doubt about just how bitter this election fight has become, this teatime showdown makes it brutally clear.

There are just a few days to go until the election and in a battle this tight, tensions are growing.